How Does A Boiler Feedwater Pump Work?

A boiler feed water pump is a pump that is specifically designed to pump feed water into a steam boiler. The water may be supplied by an outside source or be returning, recycled condensate that is produced via the condensation of steam generated by the boiler. Most boiler feedwater pumps are either centrifugal pumps or positive displacement pumps.
Because of the steam pressure that develops within the boiler, the boiler feed water pump must generate extremely high pressure in order to force water into the system. For boiler feedwater pumps that run constantly, a minimum flow device is usually provided to prevent overpressuring during low flow, retuning the minimum flow to the boiler’s tank or deaerator. 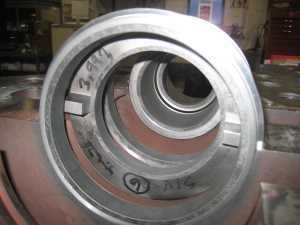 A fertilizer plant in Canada installed 2 boiler feed pumps. They were originally sized to run with one pump with a 100% capacity spare in stand-by. Soon after start-up, however, the pumps experienced problems:

After extended periods of nonstop operation or stop-start cycling, your boiler feedwater pump may start to lose efficiency. Decreased pump efficiency often translates to reduced plant capacity and increased energy use. However, the pump may appear to be operating normally, and users may not realize that anything is amiss. Factors that can impact the performance of your boiler feed water pump include:

With ever-increasing use of solar and wind power, many conventional power plants have been required to vary their output to accommodate the peaks and valleys of renewable energy generation. This requires less continuous use and more cycling of boiler feed water pumps. The frequent starts and stops of cycling cause a significant increase in contact at the pumps’ wear rings, throttle bushings, and other wear parts. This leads to increased wear and a higher risk of pump seizure.
By way of example: A large fertilizer plant in Canada installed two boiler feed water pumps. The system was sized to operate with just one pump, with the second, 100%-capacity pump in standby. Soon after startup, however, both pumps began to experience problems that affected their performance.

Running both pumps created the risk of reduced boiler capacity whenever a pump was shut down. It also resulted in far more energy use.

What Happened When They Switched to Vespel® CR-6100?

Contact Boulden for Vespel® CR-6100 Solutions to Your Pump Challenges

If you have a boiler feed water pump that is seizing, that costs too much to run due to low efficiency, or that is experiencing other problems, Boulden can help. We’ll work with you to upgrade your pump with Vespel® CR-6100 wear parts. We have solved boiler feedwater pump problems for customers in a wide range of industries—from power plants, refineries, and petrochemical plants to paper mills and even vegetable processing plants. We can provide the perfect solution for your unique application.
Download the Building A Better Boiler Feed Pump PDF to learn more about the advantages of using Vespel® CR-6100 wear components in your boiler feedwater pumps.