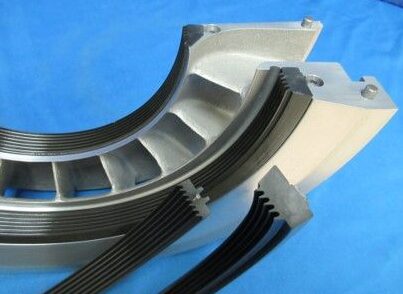 Centrifugal compressor trains are the heart of an ethylene plant. Cracked gas and refrigeration trains are critical to plant production and consume huge amounts of power. Upgrading the labyrinth seals in these machines is a proven, reliable upgrade which increases compressor efficiency. For an ethylene plant, this can translate into either increased capacity or reduced operating costs.

In the mid 1990’s, the plant began exploring the option of composite labyrinth seals to increase plant output without sacrificing reliability. The original labyrinth seals in most of the compressors were stationary aluminum labys. The weakness in this design is that it requires generous clearance between the labyrinth and the compressor rotor to minimize contact. Hard contact which occurs between an aluminum labyrinth and the rotor can damage both components. At a minimum, the contact will damage the aluminum labyrinth, further increasing the clearance. Because the labyrinths act as “seals” to restrict flow between compressor stages, any increase in clearance results in reduced compressor efficiency.

Thermoplastic composite labyrinth seals can be designed with tigher clearance than aluminum labys, resulting in improved compressor efficiency. The rule-of-thumb is that efficiency will increase 0.5—1.0% per compressor stage with an upgrade to composite laby seals. The composite material doesn’t gall on the compressor rotor during contact. Furthermore, the labyrinth teeth can be redesigned with an ideal angled profile which both restricts flow and which can “flex and return” to the original position during any contact periods—for example as the compressor passes through a critical speed at start up or momentarily surges during operation.

At the ethylene plant, the booster compressor was selected for the initial installation because a failure in this compressor would reduce throughput, but would not require a plant shut down. After the upgrade was complete, compressor flow had increased 3.1% and steam consumption had decreased 2.7%. No other work had been done which would have impacted compressor efficiency, so the entire efficiency gain was attributed to the seal upgrade.

Subsequently, the plant created a project to upgrade six additional compressors. The first two cases of the charge gas train, the two propylene refrigeration compressors, the ethylene refrigeration compressor and purge propylene compressor. Samples of the original aluminum labyrinths were supplied so that dimensional drawings could be produced. Sealing diameters, compressor speeds, gas temperatures, and pressures were also supplied. Evaluations of forces and pressures involved were included in the design process to ensure a reliable, robust design.

The net result of these upgrades was an estimated 5% capacity increase for the ethylene plant. Depending on the plant operating parameters, all of the compressors produced either more flow or consumed less power. In either situation, the upgrade had excellent economics and plant personnel were extremely pleased with the outcome.

Gulf Coast Bearing & Seal–a Boulden company–has extensive experience producing thermoplastic composite labyrinth seals in both Torlon® and PEEK® materials depending on the application conditions. Beyond ethylene plants, they have produced composite laby seal upgrades for ammonia plants, refineries, gas plants, and other industries which use centrifugal compressors. Contact us today to find out more.