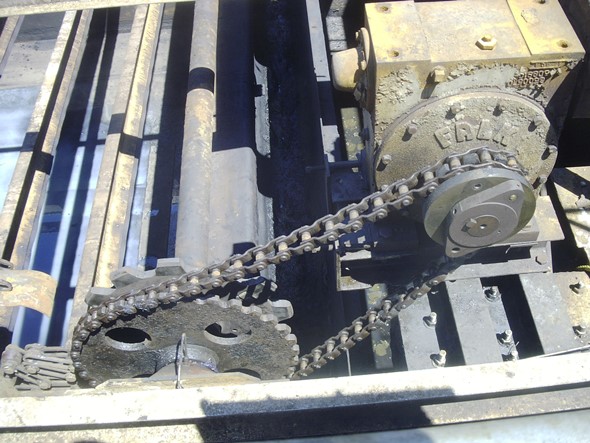 One of the first waste treatments steps in a refinery or petrochemical plant is the API Separator, which uses differences in specific gravity to separate oil, water, and suspended solids. The oil rises to the top, the solids settle at the bottom, and a layer of water is in between. The oil is typically returned to the plant for reprocessing, the sediment is scraped off the bottom, and the water is sent onward for further waste treatment.

Several plants have used Vespel® CR-6100 to improve the life of the bearings on the shafts which drive the chain and flight scraper which scrapes the oil off the bottom of the separator. Typically, these bearings are plain Babbitt/bronze bearings which can experience significant wear over time. When the wear becomes excessive, the chain driving the flight scrapers can fall off, creating a maintenance headache. In extreme cases, the shafts can fall into the bottom of the pit requiring a shutdown of the unit.

The application is tough because the bearings are lubricated by the product, which is a mix of water, some suspended solids, and trace amounts of any kind of chemical which might exist in the plant. In addition, the bearings are under massive loads due to the long, large-diameter shafts which drive the chain and flight scraper.

In the early 2000’s, a refinery in California was having problems with the original Babbitt/bronze bearings. They would wear excessively, resulting in the chain driving the flight scrapers falling off. They decided to try two potential solutions. On one end of each shaft, they installed Vespel® CR-6100 bearings, by machining out some existing bronze bearings and installing a sleeve of Vespel® CR-6100. On the other end of the shaft, they installed a bearing made from nickel impregnated graphite.

After 4 years of service:

If you are experiencing excessive wear of your bearings in this service, consider Vespel® CR-6100 as an upgrade for your next overhaul.